I read once, somewhere, that if you feel confused, you’re learning.

In my dream life, I’ve been driving a car under water. Awake, I feel I walk around submerged.

But coming back from Mészkő on Sunday evening, I felt at last within the landscape, present, with a clear, if limited, perception.

I was returning to the city with my friend Róbert, who had taken me on an adventure to see the villages of the “Unitarian Horseshoe,” a group of seven once primarily Hungarian villages in the Gold River Valley.

We started out at 8:00 am from Kolozsvár, which is the Hungarian name for Cluj and the name I now use when referring to the city I have lived in now for two months. Róbert had driven in from Mészcő to pick me up, along with Zalán, a senior theology student who would be preaching that morning in two of the villages.

Zalán’s first sermon would not be until 11:00, but we needed the early start because Róbert had a morning meeting in Mészkő. Three people from Hungary were coming to discuss a conference and celebration that Róbert was organizing to mark the conclusion of an annual graduate student research project funded by the government of Hungary.

We dropped Zalán in Alsófelsőszentmihály, and I felt a certain pleasure in recognizing some of the homes I wrote about in the posting about the Sprinkling Day perfume and poetry ritual. This sense of familiarity felt as though I had been relieved of a strain, my mind’s eye finally open enough to see. My fondness for Alsófelsőszentmihály is all the stronger for all the practice it has taken to learn to say the name of this village smoothly, an accomplishment I’m quite proud of.

Alsófelsőszentmihály, also called just Szentmihály, is one of the villages of the Unitarian Horseshoe. It’s a large village with a population today of over 4,000 people, about 25% of whom are Hungarian. Both the current population and the ratio of Hungarian to Romania speakers illustrate the challenges the Hungarian population faces in Romania today.

When the Treaty of Trianon awarded Transylvania—formerly part of Austro-Hungary—to Romania in 1919, the population of Szentmihály was just under 2,000, a strong majority of whom were Hungarian speakers. To alter the makeup of both villages and cities in Transylvania and advance the nationalization of the area, the Romanian government built factories and housing and undertook a campaign to draw Romanian farmers away from their rural lifestyle and into factory work and village and urban life.

While we waited for the delegation from Hungary to arrive, Róbert took me on a tour of some recent parsonage renovations. The church is replacing of all the windows and doors, using traditional construction techniques. Róbert pointed out that volunteers had also removed a thick layer of insect-infested mud insulation that had been in the attic since the 1930s. From the living room, I could see through the cracks between the ceiling planks to the attic. 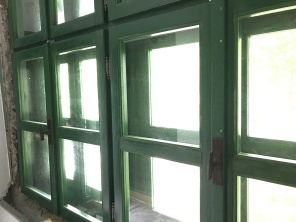 Róbert was glad to see so much progress had been made. He is organizing a celebration of the work of Francis Balázs, the minister in Mészkő in the 1930s. The workers, many of them congregation volunteers, had only two weeks to install new insulation, complete the plaster work around the doors and windows, and put the parsonage back in order before Balázs’ daughter, Enika Anderson Young, arrived from America for the conference and ceremonies commemorating the 80th anniversary of her father’s death.

Satisfied with how he found things at the parsonage, Róbert and I made our way to the community hall so he could set up his computer and get ready for his meeting. I was impressed with all that the little 110-member congregation was accomplishing. As if to say, “if you think those renovations are impressive, get a look at this,” Róbert explained how the hall had come to be.

Inside the hall were photos of congregation members digging, roofing, and whitewashing. Róbert explained that by using volunteers aided by professional planning and training, the congregation had managed build the hall for only $50,000. In one photo, a team of people were tying rebar for the foundation, work that was later inspected to ensure it had been done properly. The level of community effort going into the project inspired several of the building supply companies to refuse payment for their their services and supplies. 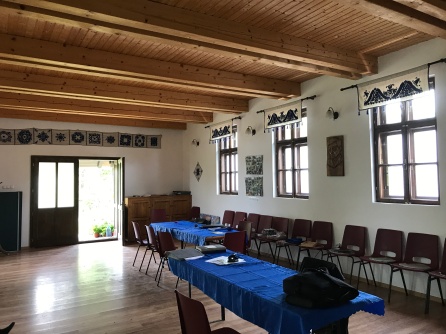 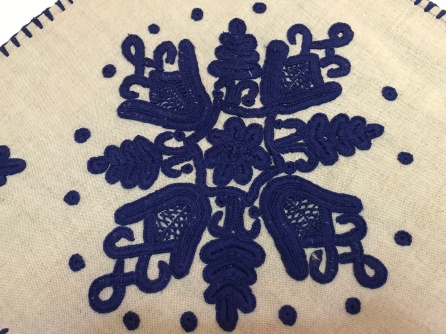 Each family has contributed to the embroidered finishing; the styles differ from one square to another.

“This fellow here,” Róbert said, pointing to an older gentleman in a photo, “has since

died. And this one, he would not be able to do this kind of labour today.” Five years had passed. The current generation are pursuing careers in cities or seeking even better prospects elsewhere in the European Union or America. The congregation was shrinking. A project of this size was now beyond their reach. “I caught the last train with this one,” Róbert said. It was a remark tinged with both pride and pathos.

Once set up for his meeting, Róbert checked his watch. There was enough time to show me something.

We got into the van and drove out to the hillside where Balázs had built a small house overlooking the valley. Although Balázs had built the house as a refuge and study, he was visited frequently by people, especially seminarians from the school in nearby Kolozsvár, wanting to talk about ideas.

We drove past numerous vineyards, one of which was Unitarian church property, and from the study house site looked down onto some of the richest farmland in Transylvania, a place that at one time provided red onions and tomatoes for half the population of Romania. Some of the land in the valley belongs to the Alabaster Church and a few of the families still cultivate the ground allotted to them. Beyond the fields, we could see where the Gold River descended from the mineral-rich hills to run alongside the several villages we would drive through later that afternoon. 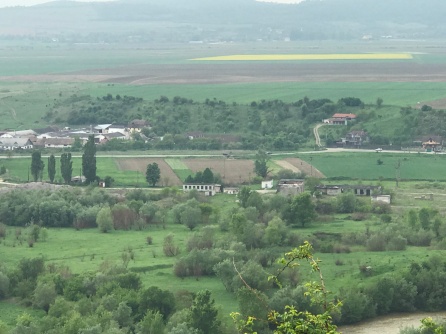 Róbert said Balázs and his visitors would often talk late into the night.

“People in the villages on the other side of the valley would look up here at night,” Róbert said, “and would see light in the windows of the little house and say, “Ah, Balázs has visitors again tonight.’”

On our return through the vineyards to the community hall, we stopped at the Unitarian graveyard to check on the renovations to the Balázs gravesite. Preliminary work had been done: the low fencing around the grave had been removed. But it was clear that the installation of new fencing would have to wait. The grounds were thick with long grass and the focus would have to been on groundskeeping to get the yard ready for the arrival of some sixty conference participants in just two weeks. A new bed of flowers on the grave would be enough to ready it.

After the meeting, Róbert changed into his ministerial jacket and ran a quick errand to pick up Zalán and bring him back to Mészcő to preach. Róbert served as cantor, leading the dozen congregants in singing from his position in the organ balcony. 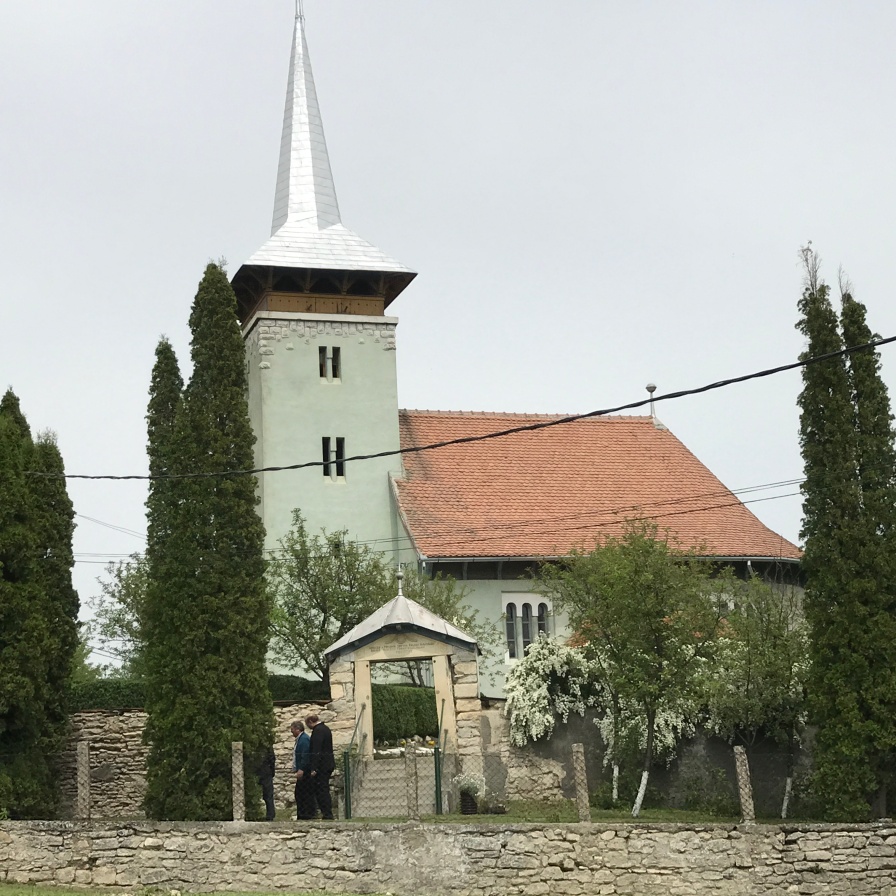 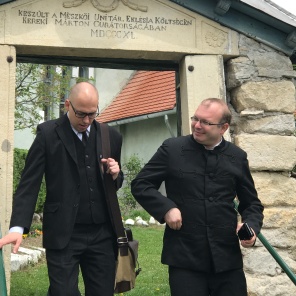 The area around Mészcő is called a karst landscape, meaning the underlying limestone rock has been carved by water courses. One of the most dramatic of these is the Turda Gorge, a beautiful nature reserve that is home to over 1,000 species of plants and animals. Some of the cliffs soar to 300 meters. I hiked the trail with a small group a few weeks ago.

Róbert took Zalán and me for lunch at the outdoor restaurant at the trailhead. The main feature at lunch was, as always, soup. Róbert also ordered a plate of Romanian mici, a spicy, garlicky ground meat mixture pressed into a sausage shape, grilled over a fire, and served with mustard.

We dropped Zalán in Torda where he caught the bus back to Kolozsvár, a 40-minute trip with a fare of just $2.50, and then Róbert and I set out for the final highlight, a driving tour through Sinfalva, Várfalva, Kövend, Bágzon, and Aranyosrákos. We stopped a little further along, on the hillside just outside Róbert’s second parish of Csegez, a congregation of just 17, where he preaches one Sunday a month.

We hoped it would be a quiet spot where we could record an interview for my research project. At first our only noise problem was the numerous all-terrain vehicles that roared by. It was easy to avoid recording them. But it was impossible to avoid recording the rain that pelted the van in a sudden, noisy downpour. We carried on and completed the interview anyway. It had been a long day. We were both tired and Róbert still had his wife and three children to pick up on our way home.

The van was full on the way home: Róbert’s wife, Réka, sat behind us with their three-year-old son and fifteen-year-old daughter, and the nine-year-old, also a boy, was in the seat at the back. The rain had let up and we drove through the late afternoon light, the crops on the hills outside Kolozsvár wet and bright at day’s end. We were quiet, the baby asleep and the rest of us tired and reflective.

After two months of trying to imagine what it might be like to live here, to be a Unitarian in Transylvania now, in the 21st century, the landscape finally felt ordinary. I had been here long enough, I had dug deeply enough, that the hills had lost their strangeness and had become just farmland. Distinctly Romanian farmland, but just farmland.

I was surfacing. I was beginning to understand.

4 thoughts on “One Foot on the Ground”

You can view the full Transylvania Blog photo library and previous posts at skyblanketv1.ca