This pocket of farmland encircled by the sylvan treasure of the inner Carpathian foothills is the possession of Romania. Governed by Romania for, now, 100 years, it is becoming ever more inhabited by Romanians. But the force of national, and nationalistic, authority is moderated now by participation in the European Union. Safeguards for minority rights and the ideals of peaceful co-habitation have given endurance some breathing room. The Hungarians who live here, once the ethnic majority, survive in a state of staunch optimism, underpinned by fierce determination.

To be Hungarian in Transylvania today is to exemplify a will to live. To be Unitarian, a minority within a minority, the will to live is most readily seen in the will to protect and sustain churches and church life. And so this post continues the immersion into the world of Unitarian churches. Because that was the point of the trip. To understand what it was to be Unitarian in Transylvania in the 21st century. And to understand, you have to begin with the churches.

You’ll recall from the last post, I connected with Csongor* at the Bolyai Street Church in Marosvásárhely, and after the baptism and Mother’s Day celebration, we headed to Segesvár for the send-off celebrations for the Reformed Church minister on his way to a new assignment in Edmonton, Canada.

Csongor took me first to Fehéregyháza, a village just outside of Segesvár where his father preaches twice a month. Before retiring, the previous minister built a new church and guesthouse complex (with financial assistance from a Unitarian Universalist partnership church in Princeton, New Jersey). This took seven years—1994 to 2001—to complete. It is a structure of both vision and good taste that both lifts the spirit and exceeds the needs of the small congregation it houses. In consideration of heating costs, services are held in a small chapel in winter months.

Each church revealed its own cultural insights; in this case, a glimpse of funeral practices.

A contemporary fence echoes the walls built around older churches to protect them during Ottoman invasions.

Benches for resting next to the well. 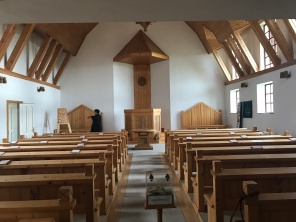 The easel with hymn numbers features ribbons with Hungarian colours. The banner against the right wall celebrates the partnership with the church in Princeton.

There are honour pews in every church where the ministers sit before ascending to the pulpit. Respected guests will sit in the honour pew to the left of the pulpit.

Even a door handle is an opportunity for the reverence of craft. 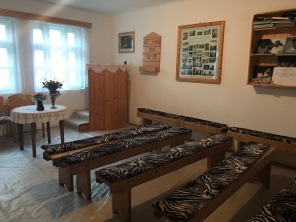 The chapel used in winter.

Unitarian churches in Transylvania feature a “Lord’s Table” rather than an altar. Here, the cloth is a custom piece of lace. 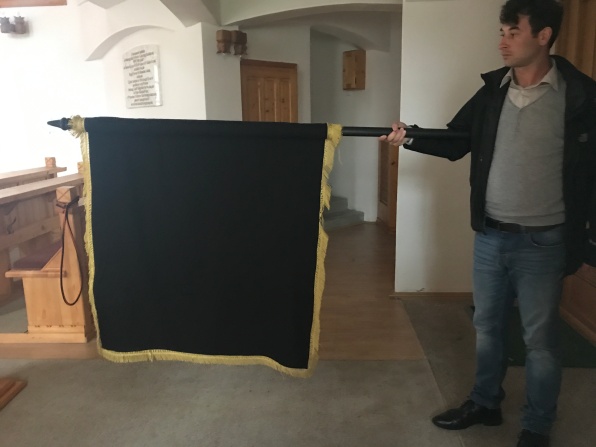 Each home in the village has four metal brackets, into which these black flags are placed to mark a death in the family.

A small basement room accessible by a separate entrance houses two pieces of furniture: a simple bench where family members will sit, and this bier. The family will receive visitors here the evening before the funeral. 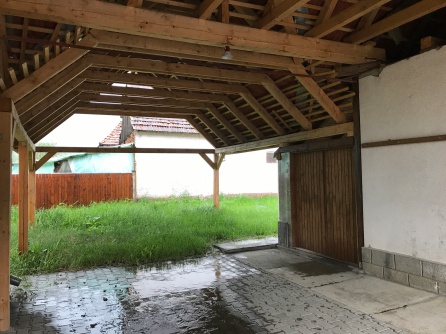 The funeral service is held outdoors. Only clergy are given an indoor service with an honour guard of four other ministers standing watch [Csongor: for how long? during visiting hours?] A cart takes the casket to the grave, never more than a short walk away.

By contrast, the Segesvár church dates to the 1700s, relatively recent for a Unitarian church. Many village churches date to the 13th and 14th centuries.

The Segesvár congregation recently gave the church interior a fresh coat of paint.

The sounding board over the pulpit amplifies the minister’s voice. In Catholic cathedrals they can be quite elaborate, often tied in with the artistry used in constructing the pulpit. Székely-style carving is included in this one as a small detail.

The hymn number display is a miniature replica of an entire traditional Székely gate. These gates grace houses throughout the region. I’m fond of this one as a bit of whimsy.

Csongor pulled back the dust covers from the pulpit to show the embroidered linens featuring a heart design. The artistry of these in Segesvár were outstanding.

Embroideries also grace the hymn rail in front of the first pew. The tulip designs are particularly clear. The embroideries are always either red or blue, the dye colours most easily made at home.

The Segesvár church has a bust of Ferenc Dávid, the founder of the denomination, at the front door.

The side of the church that faces the parsonage next door.

The crest of Hungarian Unitarianism features a snake circling a dove, symbols drawn from the verse in Matthew where Jesus instructs his follows how to deal with persecution—be as shrewd as snakes and but as innocent as doves. In Segesvár the crest was rendered in three traditional Transylvanian crafts: wool embroidery, chisel wood carving, and crewelwork. 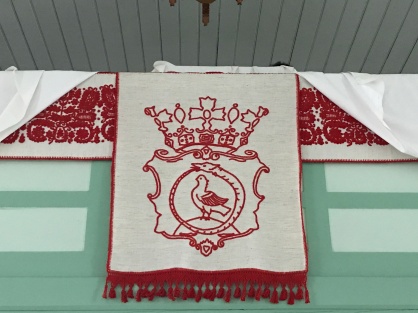 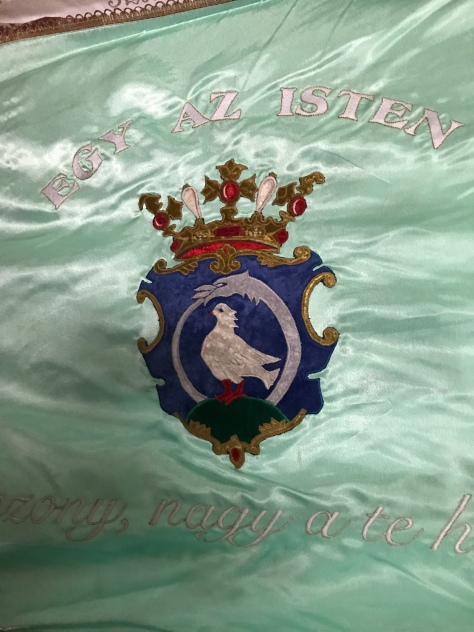 The visit to Segesvár lasted two days. It was a chance to deepen my friendship with Csongor’s mother, Enikő, who had been on the bus trip to Venice, and to get to know his father, Jakab. Staying with them gave me an opportunity  to see the historic sights of the medieval city—and to become more acquainted with parsonage life. Jakab will retire in two years and he already has a well developed honey production business that he will continue to pursue in retirement. They run a well-ordered parsonage and productive garden. I wish I could have observed the chimney-cake baking that the parish women undertake on Saturdays to raise funds to attend conferences, but I did get to enjoy this traditional treat as dessert at both lunch an dinner. 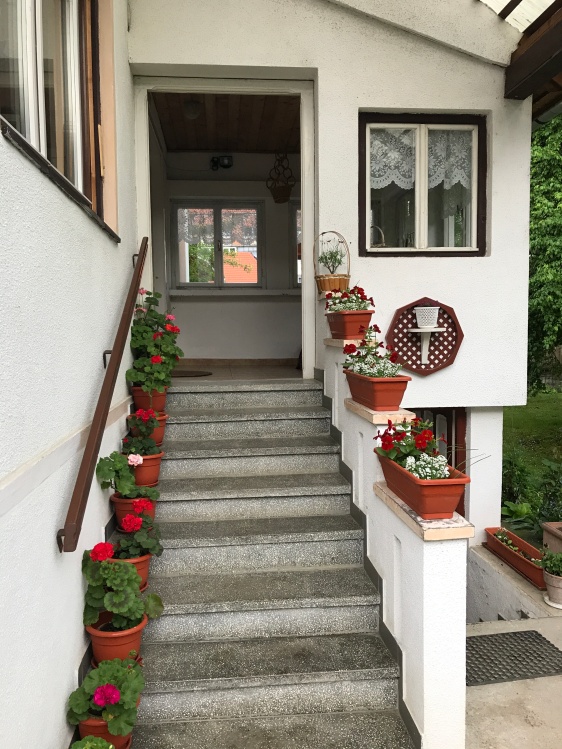 Red, green and white—the colours of the Hungarian flag.

Enikő looking as bright and cheerful as her flower garden. 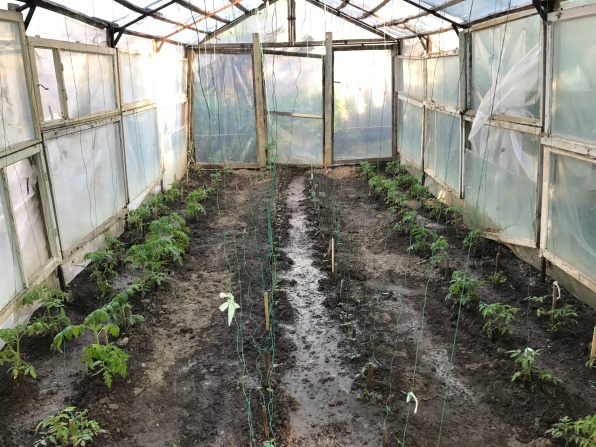 Tomatoes and beans in the hot house.

This lace, made by Enikő’s mother, is, without exaggeration, the most beautiful piece of handwork I have ever seen.

Father, as long as we sleep, be our guardian shepherd. 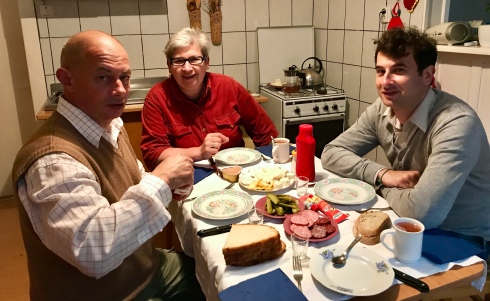 The evening meal, taken as late as 8 or 9 pm is similar to breakfast.

In this instance, the cheeses served included a homemade yogurt cheese and, spread here on a bit of bread, urdă, a cheese made from whey. 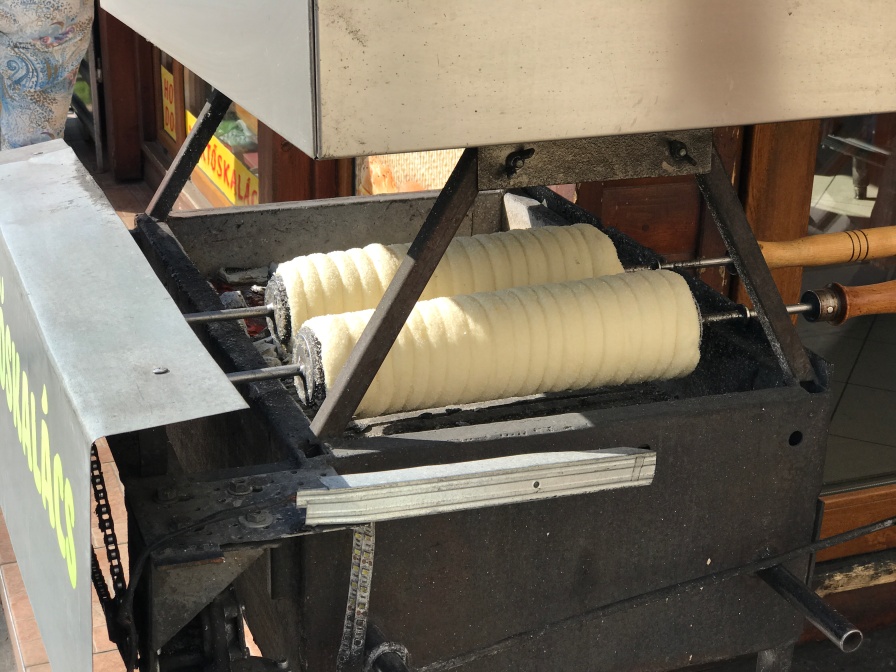 These shots are from of the original 13th century Saxon city of Schaäsburg the 13th century when the King of Hungary invited Saxon craftsmen and merchants into Transylvania in a strategic move that both enhanced defence capacities and developed the economy. The Saxons were granted political liberties in exchange for their services. The walled city is a UNESCO World Heritage Site.

The medieval city below the walls.

The inside town centre.

Buildings often display the year of construction or last renovation. 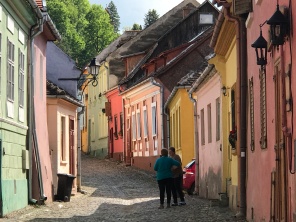 A chat between neighbours; ordinary life continues in the 21st century. 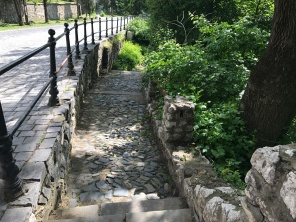 Town residents climb these stairs from below the wall laden with grocery bags to get to their homes.

This entrance was built by the Saxon tailors, the richest of the town’s guilds. A contemporary residence abuts it.

I enjoyed this whimsical staircase to the bell tower in the Hungarian Catholic church.

… especially given its excellent view of the clock tower roof. 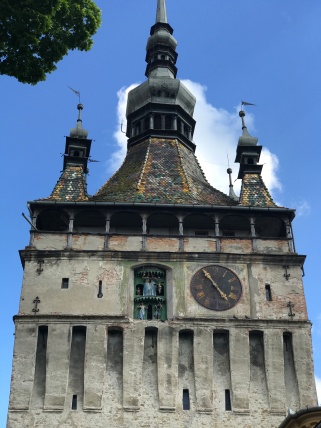 This figures on the citadel side of the clock tower rotate at 06:00 and 18:00, marking the parameters of a craft workday.

This advertisement for a hatter is in the museum that fills the small floors on route up the clock tower stairs.

On the lower city side of the clock, figures marking the days rotate one position at midnight. Here is Zeus, the figure for Thursday.

Panorama of the view from the clock face.

After the two days in Segesvár, I left Maros County and headed to the Harghita.

One thought on “Immersion–part two”

You can view the full Transylvania Blog photo library and previous posts at skyblanketv1.ca